Dog bite: those words have an emotional resonance, don't they?
If you've ever been bitten by a dog, you don't forget it. It usually happens so fast that it leaves you stunned. 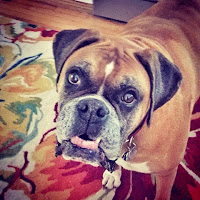 May 17-23, 2015 is National Dog Bite Prevention Week, and with the holiday weekend upon us which is sure to include interacting with family pets, it seems important to talk about keeping dogs happy and everyone safe.
The following statistics speak clearly:


Dog bites are highly preventable, and it comes down to humans (both kids and adults) understanding what facilitates them and how to best deal with a dog who bites.
These incidents happen in all sorts of scenarios.
The truth is, dogs often bite for one common reason: They are uncomfortable or fearful about a situation that a human has put them in, and the human is not reading the dog's behavior correctly.
Sometimes it's as simple as a dog being startled from his slumber. Maybe they just don't mesh well with the ever-changing dynamics at a doggie day care facility. Perhaps a human in their midst doesn't understand dogs very well, and they have handled a situation poorly, or deliberately pushed them too far. In many cases it involves a child — young children often lack the skills to understand when a dog is uncomfortable or just wants to be left alone.
The dog then reacts.
In most of the cases that are seen, the dog's behavior is misunderstood. The pet may have lacked proper socialization early in life, or perhaps it is because they haven't had proper positive reinforcement training. Because of that, they haven't attained the skills they need to navigate through these type of encounters (with both other pets and humans), and some are actually quite fearful. The latter really requires a deft professional who can help both the human and the canine.
Misunderstanding these concepts or writing a dog off as merely 'aggressive', 'dominant' (a commonly misused term) or other labels and leaving it at that can escalate situations to a point when a dog bites someone — and that's not an outcome that anyone wants.
No matter the situation involving a dog bite, it happens because of an oversight on the part of a human.
It's up to us to learn the cues that dogs exhibit in their body language and to properly socialize pets from an early age.
Teaching children the rules of approaching a dog — familiar or otherwise — is crucial. Here are two very wise points that the American Veterinary Medical Association makes:
Click here for a great illustration "How Not To Greet a Dog", by Lili Chin. It's also kid-friendly and can be a super way for kids and their adults to have a good discussion on interacting with dogs.
With diligence, proper education and understanding of canine socialization, behavior and body language — and precautions to ensure that dogs are not placed in a situation where they will react by biting — we can keep it from happening.
Click here for more comprehensive information on the topic.
Lorrie Shaw is a freelance writer and owner of Professional Pet Sitting. Reach her at 734-904-7279 or ppsa2mi@gmail.com.

Posted by Lorrie at 4:24 PM No comments: