Working with dogs can be unpredictable, as anyone who does so will attest. I've seen my share of (mostly) minor injuries through the years: bruises, twisted fingers, scratches, minor sprains—even blows to the face—and one of those latter instances made me grateful that I need not wear eyeglasses full time.

While being mindful and employing safe and force-free handling techniques on the pet professional's end is vital in making any interaction that a companion animal has with them is as favorable as can be, it's only part of the equation. It's equally helpful that a pet not only be accustomed to being handled (with care, of course), but to be reliably trained to understand cues and to have a reasonable amount of self-control. That not only ensures the safety of the human, but as importantly, that of the pets.

We understand that a dog needs be able to understand and perform cues, right? Of course. When a dog can stop what they're doing and listen when they are being cued to do something, it's invaluable. And, proofing those skills in different scenarios is vital. But, achieving a reliable level of recall can be a bit complicated when a dog has trouble reigning in their excitement or when they have issues with reactivity.  For some, it's an infrequent event, and understandable, while for others, well, it can be an ongoing problem. And, unfortunately, it can put dogs at risk of injury.

I'll offer a cautionary tale (one that I've permission to share) and I'll be honest: this isn't the first time that I've seen a scenario like this. 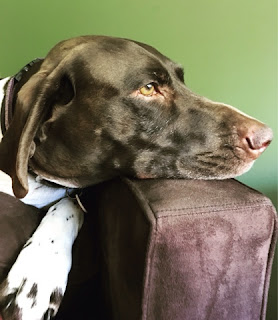 A few months ago, a friend got in touch to ask if I had an extra crate that they could borrow. Their very sweet, large mixed-breed dog, Maggie, had injured her leg the night before and needed to be confined while unsupervised for the foreseeable future. While the injury—a torn Cranial Cruciate Ligament (CrCL)—is common, the poor pooch hadn't sustained the injury while running or during rough play, as one might expect. You see, Maggie's habit is to get really excited when she sees people. Running around like crazy, jumping up in the air, carrying on, that sort of thing. (We've all witnessed bouts of frenzied joy like this that seem harmless, right?) Upon the family's arrival home from an event on that evening, Maggie began jumping around wildly in her usual unbridled fashion despite her human's efforts to tone things down, and BAM! she landed on her leg in just the wrong way. The result was an injury that was not only painful, but required expensive surgery, and a lengthy recovery and rehabilitation period.

Once all was said and done, my friend insisted on enlisting the help of a qualified dog trainer to better communicate with and to empower Maggie in having some self control, so that there wouldn't be a repeat of what happened. The result is that Maggie gets far less keyed up in those situations she used to find difficult to navigate, which keeps her safer, and her humans are enjoying fewer mishaps, too.

Never underestimate the power of the skills and self-control that come from solid dog training grounded in positive reinforcement. They'll make sharing daily life with your four-legged friend more fun, safe and rewarding.

Need help hiring the services of a qualified dog trainer, behaviorist or veterinary behaviorist? Click here to get a better understanding of the field, and the certifications that you should be familiar with.

Posted by Lorrie at 8:40 AM No comments: