Enrichment for indoor cats is the focus of a lot of talk these days, which is something I'm glad to see. With the push to keep cats indoors, it's keeping them healthier and safer, but in all honesty, many cats are bored to death.

Cats are hunters. In the wild, they hunt, eat, groom, sleep, repeat—24 hours a day. They don't suffer boredom the way that indoor cats do. In a piece from earlier this year, I highlighted just one of the ways that veterinary professionals are trying to combat that. But there's so much more that we can do. 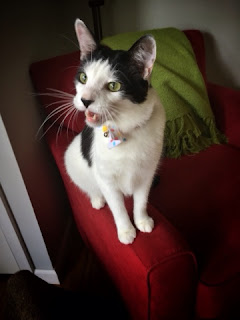 I often recommend using catnip as a form of enrichment in cats, especially those who are indoors-only, but it's also useful in other ways.

Before taking cats to the vet, medicating them or administering sub-q fluids, I give them a little to set a positive tone, and coupled with Feliway it's especially effective. I also use it as an enhancement to boost a waning appetite in older cats, especially those struggling with inappetence associated with chronic kidney disease. Give said kitties a little catnip a few minutes before setting down a dish of food, and that can pique their interest.

A recent study on how catnip and three other plants—silver vine, valerian root and Tatarian honeysuckle—affect cats, yielded some interesting results.

Researcher and owner of Cowboy Cat Ranch, Sebastiaan Bol, got the idea to test how the old standby fared alongside the other plants, and used participants from a cat sanctuary, a shelter, an animal hospital and even those living in family homes. The cats were divided into three behavioral categories: those who tended to be scared or shy, an intermediate (cats who had interest in being approached and would accept being petted) and affectionate cats (those who would approach and ask for pets).

Age, nor personality didn't seem to matter in terms of responding favorably and the same was true in terms of the sex of the cats. It does seem important to note that those who were more advanced in age had less-intense responses when given any of the plants. 23 of the 100 cats included in the study responded to all four.

Overall, silver vine was the most favored of the offerings, followed by catnip, Tatarian honeysuckle and lastly, valerian root.

I found this study especially intriguing as in working with a lot of older cats, I'm looking for more ways to offer additional enrichment when the more traditional tools in my arsenal have fallen out of favor. If your cat isn't feeling the love when given catnip, you might perhaps try a different brand, or you can even consider introducing some silver vine.

Lorrie Shaw is a freelance writer and owner of Professional Pet Sitting. She has been a featured guest on the Pawprint Animal Rescue Podcast, talking about her career working with companion animals and in animal hospice -- and the benefits of introducing palliative care with one's pet earlier. Shoot her an email, contact her at 734-904-7279 or follow her adventures on Twitter.