It’s not clear which is more challenging to face: the sudden and unmistakable red flags that a pet presents with when a health crisis emerges, or that the little and seemingly insignificant changes that have been unfolding that leaves one feeling hoodwinked after a serious diagnosis. Either way, it means a lot of things; decisions made along with the veterinarians involved and in most cases, becoming quite familiar with the disease, its characteristics and resulting outcomes -- we follow a road map, so to speak.


Maps are helpful. They help us understand more about the journey that we’re taking, no matter how fast we’re barrelling toward the proverbial destination. Maps are empowering, tangible, even if they appear nebulous at times. 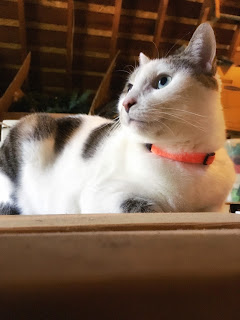 It’s easy to look back as a pet ages, or a disease progresses -- or how a pet’s age complicates a disease -- and think, ‘I feel like if I had to go through this again, I’d know and do better,’ and that’s a great thing. (That said, age is not a disease, but the needs of a geriatric pet are far different than that of one in their senior years or younger.) It’s a lot like traveling to a place you’ve been before and naturally feeling more confident about where to go, places you would avoid. But you wouldn’t use a road map for one town to navigate around another, right?


So why would we try that same strategy to cope with a pet’s illness?


It might seem logical to tap into our previous experiences in caring for a pet with serious health issues and apply that to a current situation. To some degree it can be helpful, but rooting our approach solely based on that just complicates things. A knee-jerk reaction of ‘Why would anyone do that?’ is common, but the truth is that there are lots of reasons behind that kind of blanket strategy. The antiquated school of thought that pets prefer to be left to deal with their illness still clouds reality, unfortunately. It’s also easy to get bogged down with the notion of how to manage a pet’s illness in terms of time and other resources. Maybe you know there’s something wrong, but pursuing a concrete diagnosis means getting news that you don’t have the tools to cope with, so denial becomes a safe haven. Using previous experience feels empowering when you don’t feel so great about your ability to deal with what lies ahead. Past experiences with a pet's decline might have been especially poor, and 'going there' again is just too difficult, emotionally. Sometimes it’s much more or even less knotty than that, and I get all of it.


No two pets are alike, and especially in their needs when it comes to a health issue that is impacting them. What works for a pet with advanced kidney disease doesn’t so much for another with bone cancer (and to be honest, not all manifestations of cancer are created equal in the way that they are treated and palliated). I admit it’s not unheard of, after my not seeing a pet for several months to observe unmistakable, startling changes in their health status and gently opening up a conversation with their humans to hear a refrain like, ‘Tessa isn’t showing the same signs of trouble as Marky was when he was so sick. She has to be okay, right?’


Sketching out a fresh road map with your veterinarian that offers clear routes -- as well as the alternate ones that they are so good at coming up with -- to manage a pet’s serious illness, keep them comfortable and avoid undue suffering is crucial. Even if the decision is made to not pursue diagnostic tests to obtain a definitive diagnosis, veterinarians can design (and tweak as needed) a care plan that can offer comfort care and a good quality of life for the duration just the same. Using a faulty parachute crafted solely from the too-narrow focus of previous experience is no substitute for a tailor-made care plan, despite any apprehension about what’s to come. In fact, the latter just might surprise in it’s simplicity, affordability and as importantly, it provides the structure to support the animal-human bond that is so vital to us.

Lorrie Shaw is a freelance writer and owner of Professional Pet Sitting, where she specializes in providing support to families with pets receiving palliative and hospice care. Shoot her an email, contact her at 734-904-7279 or follow her adventures on Twitter.
Posted by Lorrie at 8:48 AM No comments:

Social media is great, though I have to say at times, I find it a little frustrating. No, it's not due to the current political climate, though that could be enough. People love to share things on social media, especially things that are funny or cute, at least things that they think are so.

Several posts per day on Facebook and other platforms contain 'smiling' dogs or those looking 'guilty'. Many seem to demonstrate family dogs 'nannying' the new baby in the house, while others are caught on video pulling off their best Houdini impersonation as they willfully escape their well-secured wire crate.

When you work with animals, and have a decent working knowledge of animal behavior and health, you see the world through a very different lens than other people do. And when it comes to interpreting what a dog or cat or other creature is doing behaviorally that's very much the case. I do realize that because a video seems fun and happy to others, they feel compelled to share with me. The sentiment is appreciated, but the visuals that I see make me sad.

That dog that's smiling? They're often either very uncomfortable or fearful and demonstrating calming signals—signals to other party that they'd like the current interaction to cease. And as for dogs and guilt, that look that they're offering up isn't one of feeling remorse or an apology, it's a simple learned association based on classical conditioning, whether it be punishment or other exchange that makes the dog uneasy, and yes, yet another signal that they're uncomfortable and communicating that they'd like the interaction to stop. In other words, the dog is displaying appeasement: behaviors that actively or passively, depending on how far the situation had escalated, convey anything from I'm uncomfortable to, this is my limit.

And if a dog is craftily, frantically breaking out of their wire crate, it's not funny, nor is it demonstrative of their intelligence. It's fear—and a clear signal that they can't cope with being confined in that way, and shouldn't be.

It seems important to mention that those dogs who are seen with the littlest of human housemates to be 'guarding' or displaying other human behaviors or emotions often are very uncomfortable with what is going on and giving clear signals that they need personal space, or want the noise, hugging, tail pulling or otherwise offensive interaction to stop. This is true for families with newborns as well; the wriggling, noisy, tiny human can pose a serious source of feeling overwhelmed for a pet.

Children are even less able than grown ups to cue in to the calming signals, the demonstrations of fear and other examples of non-verbal communication, and they're the most impressionable and I might add, equally vulnerable as the pets in situations where the animal feels like they've no way to navigate out of them. It's our responsibility as adults, as advocates for both parties, to keep them safe. 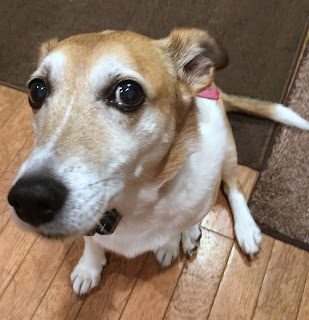 This trend of putting our own personal stamp on the way that we think that an animal responds to a situation is well-cultivated thanks to the ease of sharing on social media platforms. Sadly, and it's nothing short of anthropomorphizing at its most vigorous. Interestingly enough it's in sharp contrast to the strides that have been made in understanding animal behavior, which in my view illustrates how much work needs to be done to bring better understanding to the masses. That's not to say that healthy efforts aren't being made. One counter to the misinformation, Occam's Rover—which was created by Jesse Miller, current editor of the International Association of Animal Behavior Consultants (IAAABC) journal—deconstructs and explains the seemingly harmless videos that are enthusiastically posted on Facebook, Twitter and other places. For less-trained eyes, it helps the rose colored glasses that are much more comfortable when positioned squarely onto the bridge of nose, to slip down, if one is open to that. (Miller also pens the blog, Dogs + Ethics, which is equally terrific and can also be found by clicking here.)

Though it seems heartwarming to think of our four-legged housemates having qualities that seem to be on par with our own, it's important to remember that they're animals, not humans. There's nothing with saying that. We're doing them no favors by imposing unreasonable expectations on them behaviorally and emotionally. In fact, we cause them needless strife. So, much like with any other blurb or content that you find making its rounds on the internet, consider taking a minute to think about what might really be going on before you share. Together, we can better serve our animal friends by seeing them through an unadulterated lens, and not one that we unwittingly filter through wishful thinking.

Posted by Lorrie at 7:25 PM No comments: