I deal with a lot of dogs on a daily basis, and I find it fascinating to tap into their unique "language" cues that convey what they are trying to express – both the verbal and non-verbal kind. I'll be honest, the latter is by far their more precise lexicon, though because of it's nature, is more commonly misinterpreted by many people.

Why does this unique language barrier crop up? 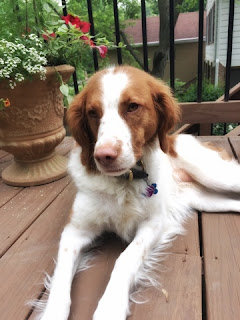 Humans have come to rely so much on verbal communication with each other that we often miss out on everything that is being said, regardless of we're interacting with an animal or a human. The notion that we make assumptions about what is being conveyed rather than actively "listening" with our ears, eyes and emotional intelligence gets in the way, too.

Think about all of the times that you've felt misunderstood, or like you've completely missed the point of what someone is trying to get across. Yes! – dogs can totally relate to that. The fact is, canines do not communicate ambiguously, even if they're lacking in social skills. (In that case, they'll most definitely let you know that they're uncomfortable or are unsure about a situation.)

When there's a misinterpretation with a human, often it just leads to a frustration. The same can easily happen when interacting with a dog, but notably – like we saw last week with a young girl in here in Michigan – there are cases when serious consequences can be the result. Those incidences are of special concern, since the opportunity to easily prevent an unfavorable interaction between a child and a dog is missed, and the outcome, even more disheartening for both parties and their loved ones. After offering some sage insight in a comment on the online article, the responses to it sent a clear message: 'We just don't understand dogs, but we have tightly-held opinions about them anyway.'


Projecting our own biases

It isn't an isolated kind of thing, this example of clinging to our misconceptions about why dogs interact the way they do with us, and what their intentions are when doing so. Our default is to relate an experience to something familiar – usually a reaction that as a human, we might have – and forge ahead with our opinion of what unfolded.

Just as an example, I'll use one of the canine behaviors that I often see misinterpreted: face-licking. Sure, dogs may engage in it as a positive gesture to those humans that they feel comfortable with, and some more than others.

These remarks are cringeworthy at best, as the human is likely anthropomorphizing the pet's behavior.

In any case, the behavior in a lot of cases is nuanced and intends to communicate something different than what the human thinks.

Sorting out and clarifying behavior objectively

Let's back up a bit so as to offer some context.

Muzzle-licking is seen amongst groups of dogs and thought to be a sign of appeasement or goodwill. Wolf pups engage in it as a way to stimulate an adult pack member's reflex to regurgitate the food that they've brought back in their stomach to feed their young.

But I digress. I'm going to stick to the interaction between dogs and humans.

I've seen face-licking exemplified in several charges over the years, and the situations have varied. The point is that the context of each is different and I've figured out what is being communicated to me. One in particular uses it to get my attention if she doesn't feel like I'm homed in on her (usually I get distracted by her canine housemate who is vying for my undivided attention). If I'm within distance, she'll reach up or over and give a quick lick to the face. Another dog will do so after playing a friendly game when a toy is involved – think fetch or tug-of-war – and he is ready to end the interaction and take the object for himself. (If I'm standing, he'll lick my hand excessively instead.)

The context of the behavior is vital of course: Is it one quick lick, in the case of my furry friend? Is it repeated face-licking with their full tongue? Does the dog move away once they've done it? Is the behavior present only with certain people? Is an object involved possibly? Is this a new occurrence? There are so many variables.

Paying attention to what is going on is essential because there's a possibility that a dog isn't comfortable, which needs to be addressed, and fast. I emphasize this when it comes to children.

Jennifer Shryock, BA, CDBC of Family Paws Parent Education details the variances in this behavior on her website that she coined "Kiss to Dismiss" in 2014.

Below is an excellent video of a face-licking interaction between a dog and a baby that begs some questions:

• Is the dog engaging the baby in a game? (The intensity of the face-licking changes during the exchange, certainly.)

• Does the pooch want to be left alone with the bone (which may or may not be a high-value object to them)?

• Is Bruno feeling conflicted about wanting to enjoy the toy in peace/being close to his people/honoring the cue from the mom?

(Though it can be daunting to watch, there's a lot going on in the video. Never mind scorning the parents of the baby and stick to what can be extrapolated from the footage instead.)

I'm not sure that Bruno really wanted to play a game. Instead, I see a dog that has a ton of self-control but feels conflicted about what to do, so he's doing his best to communicate his displeasure and stay in close proximity to his people. I don't know a lot of dogs that would do this, and in any case I don't feel it's fair to expect out of them.

This is just one example of the canine behaviors that we might misconstrue.

The bottom line is, anthropomorphizing a dog's behavior is easy to do, as it is to demonize them when things go awry. With our canine counterparts living alongside us for so long and adapting so well (and quickly in terms of how much we've expected out of them), we need to remember that they have a language all their own. Though they've needed to stretch considerably to understand the way we communicate, we've not always reciprocated. In fact, we barely meet them halfway in a lot of cases. That has resulted in some unhappy, frustrated pets and unfavorable outcomes. We need to do better.


Lorrie Shaw is a freelance writer -- most recently as a contributor on MLive -- and owner of Professional Pet Sitting. Shoot her an email, contact her at 734-904-7279 or follow her adventures on Twitter.

During a dog's senior years and end-of-life, wearable technology can be a boon

Homing in on what our pets are doing on a day-to-day basis is important throughout their life, though no other time than while in their twilight or hospice seems more pressing.

Through the years, being a caregiver to pets – dogs, namely – in their very late age has been a big part of the [peace] work that I carry out each day.

It can be tough for those sharing life with pets in their twilight or hospice: bladders aren't as trusty; joints, more stiff; health issues more complicated. I am often contacted by families with older dogs to help out during this time when they can't be home due to work or other obligations. Having a hand to ensure their furry friend gets potty breaks, a little tender companionship and most of all, to be the eyes and ears to monitor things is certainly a boon (not to mention the opportunity to have a brief mental break from the situation).

A lot of what goes on in the final months and weeks has to do with being aware of what is happening, as well as being honest with oneself about what is observed: appetite changes, sleep habits, willingness to engage and activity levels tell the story. The latter can be hard to judge if one is away tending to work responsibilities, of course, and few people have the luxury of being able to be home as often as they'd like to keep track. Those that are frequent business travelers come to mind most prominently.

Technology has come a long way in the years since I started as a professional caregiver. That sector has opened up to the pet product market, and wearable technology for pets has seen a surge – a multibillion dollar one – and one product that I had written about a while ago came to mind as I was considering how fortunate I am to be able, largely unencumbered, to tend to my own 15 year-old dog, Gretchen as she meanders through hospice. 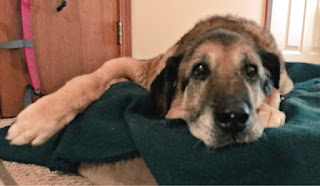 The Whistle and other products like it can provide valuable data about how much activity a companion animal has each day (and track changes), helping to flesh out an accurate overall picture about what's going on with them. Information like this can be relayed to the primary vet, resulting in better communication with the clinician, and in the end optimal health management and comfort for the animal.

Attached to a dog's collar, the Whistle – which is waterproof – tracks physical activity and syncs the information automatically via an app to one's smartphone.

The app and device are also capable of tracking and communicating information about food intake and medication (by manually logging each in), two things that are vital in monitoring dogs in later stages of life. This is especially helpful if inappetence is an issue, and as is in so many cases, multiple medications are given daily.

We know that pets that are in the midst of a tender time of life fare physically and emotionally better having people around with whom they have a bonded relationship. But while any technology can't replace what that provides, it can enhance and empower their humans to better care for them if used mindfully.


Lorrie Shaw is a freelance writer -- most recently as a contributor on MLive -- and owner of Professional Pet Sitting. Shoot her an email, contact her at 734-904-7279 or follow her adventures on Twitter.