They've demonstrated that their mental abilities are on par with that of a 2-3 year old child, but in one area, dogs leap ahead: their ability to pick up on when they are being misled.

Canines have lived alongside of us for a period of time that would make it seem unlikely that they wouldn't be able to figure out many things about our behavior, but some concepts are quite complex, for example, untruthfulness. A research team from Kyoto University wanted to delve into whether or not dogs could recognize that behavior (or how long it would take to do so).

The researchers, led by Akiko Takoka, decided to keep things simple, and the payoff was surprisingly telling.

A pair of experiments were done in a study titled,  "Do dogs follow behavioral cues from an unreliable human?", with the results appearing in an October 2014 issue of Animal Cognition. 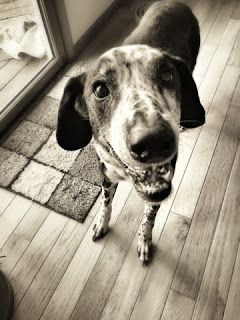 In the first experiment, 24 dogs were used, and it worked in three phases. (It seems important to note that the team was confident that the dogs would follow the prompts given by the humans in the study.) In the first phase, two opaque containers — one of which had a food treat hidden underneath — were presented to each dog. Phase one consisted of the human pointing to the container with the food underneath. The dog then chose that container and got the food reward. Phase two set out to demonstrate that the human couldn't be trusted to give a reliable cue. To achieve this, the dog was shown which container had a treat underneath and which did not. Once the dog was released to choose a container, they were encouraged to select the one without the reward.

Finally, the experiment was repeated, but this time the dog was cued honestly.

The findings told the story:

Phase one yielded what one would expect; the dogs demonstrated trust of the human. But in the later phase, each dog had deduced that the person was not to be believed, with less than 10% of the subjects following where they were cued.

Takoka noted that she was surprised that the dogs had caught on to this concept so quickly.

But the researchers were interested in learning more about whether or not dogs attached that concept to all humans, or only those that they have had that specific experience with.

Repeating the study would certainly help clarify that, so researchers did so with a new group of dogs, 26 in fact — with each phase done exactly the same way. In the final phase, however, a new person was introduced in place of the untrustworthy one.

The subjects followed where the person encouraged them to go. This of course means that dogs are predictive of behavior from individual people, and they adapt as needed.

It seems that the old adage 'when someone shows you who they are, believe them' is employed by dogs just as their biped counterparts.

She went further to say that it would be interesting to see how wolves would fare in a like experiment, as that would shed more light on the effects of domestication on the social intelligence in the dogs that we know today.

Comparatively, how do children fare in studies that test the capacity to discern trustworthiness?

— at age 3, children are pretty excepting of what they are told, even if the person is dishonest
— four year-olds exhibit dubiousness in the same situation
— by age 5, children can more easily discern that what they are being told is not true

As you can see, the jump in the mental sophistication of humans between ages three and five is vast, and given that an adult canine's mental capacity is said to be that of a 2 to 3 year-old child, a dog's ability to process that concept reliably is certainly intriguing.

The outcome of the study reinforces a basic tenet in canine training and behavior: relationship and trust building is paramount in developing good communication and cooperation, thusly helping both the canine and human get the most out of of training exercises and establishing a bond.

Lorrie Shaw is a freelance writer -- most recently as a contributor on MLive -- and owner of Professional Pet Sitting. Shoot her an email, contact her at 734-904-7279 or follow her adventures on Twitter.