Carrying around a little more weight than we would like is the kind of thing that tends to sneak up on us. Most of us love to eat, and if you're like me, cooking and feeding others is gratifying, too. That extends to our pets just the same.

That's not surprising, given that the market for pet food has grown so in recent years. It used to be that there were just a handful of choices for both dogs and cats but with the flood of limited-ingredient, organic and frozen raw diets available, we tend to be much more conscious of how we're nourishing our companion animals. 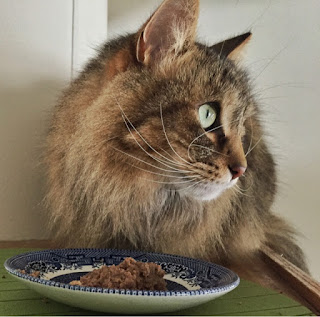 There's one problem, though. We're not paying attention to how much we're feeding them.

For a pet, being overweight means having many of the same risks and health issues that affect us humans. Heart and respiratory disease, diabetes, osteoarthritis – even some cancers – just to name a few.

In a study on a group of dogs, researchers found that the obese animals shared something with overweight humans: a less-diverse gut flora and in fact they also harbor more Proteobacteria (which has been shown to impact the immune system negatively). Additionally, because serotonin tends to be suppressed, weight loss is more difficult.

The study didn't touch on how this kind of thing affects felines, but given that other mammals are affected in kind, it seems logical that being overweight would impact cats just the same.

I think it's fair to say that we tend to be a bit more mindful about the weight of our dogs, don't you? Is it the way that they engage with us, or perhaps that we pick up on the aforementioned health issues in other species less easily.

The fact is, aside from any chronic medical conditions, like Cushing's syndrome, the reason for weight gain in pets is simple: humans.

Obesity in cats is serious, I assure you. And just as with any other pet, the additional pounds shave years off of their life, along with quality of it.

Plenty of vets will tell you that seeing a cat at a mindful weight is less common these days.

Over the years, there have been more pudgy cats in my care than I can shake a stick at. A couple are or have been morbidly obese; unable to get around easily, or groom themselves, diabetic and as I can see, struggling with profound joint pain.

In one case, breathing proved problematic: asthma, treated with daily inhaled meds and also a recommendation from the vet to feed the prescription calorie-restricted diet and in carefully-measured amounts. The expensive asthma meds were administered with no question. Ditto for the prescription food. In the latter case, without abandon. Along with regular food, and an ample supply of treats.

She always looks so hungry. She sulks and nags me for food. Just a little extra... it can't hurt, right? I'll put extra bowls out while I'm away so that I don't worry. The inhaler seems to be helping a lot – and she tolerates it so well.

Until her beloved pet didn't need the medication anymore because it was of no use to her. The obesity contributed to other complications and it was just too much.

Stories like this, and the thoughts about how we perceive our pet's feelings about food – and us – aren't that unusual. It's not hard to go to that place. We love to nurture our pets. But are they manipulating us, or are we doing that to ourselves?

A recent study supports the notion that it's a little of both, but the important thing to remember is that cats learn to influence us in giving them food when they don't need it. They beg, vocalize, follow us around and pace, but we can't give in to that provocation – even if we feel those pangs of guilt for not appeasing those requests.

We can get past those emotions, and so can our pets though it takes a little time. In fact from an emotional standpoint cats do quite well, as the study reveals: though they may harass us for food, they don't hold a grudge when we don't comply, nor do they exhibit undesirable behaviors like urine marking or aggression. Quite the contrary, it seems. The felines included in the study had a tendency to be more affectionate towards their people after enjoying their prescribed meals.

When a cat starts nagging for food, it's easy to replace playtime and attention for chow. Instead of reaching for the treats or an in-between meal snack, grab a cat toy or the brush and give a little of your time. What might be discovered is that the behavior isn't really appetitive, but a simple cue for attention.

Adhering to the recommended amounts of food that your clinician prescribes for weight loss can be easier by using a cup that's clearly marked with the measurement. In households where more than one person might be responsible for feeding, confusion can be avoided by measuring out the proper amounts ahead of time and putting them in resealable plastic baggies labeled for the appropriate times of day.

Investing in a feeder that is covered and opens at set times can be a boon for households with felines that are especially persistent. This way, kitty doesn't associate their people with being a food source so much.

I'm often asked about the best way to cut down on vet bills, and my response is always embarrassingly succinct.

The good news is that in doing that, you'll be keeping your pet comfortable as well as extending their healthy years.