I see a lot of new products and gadgets designed to help make living with pets better, and though I find some impressive, others just make cringe.

A recent article on The Bark reminded me of the complaints that I hear from pet owners about the minutiae of day-to-day care that is necessary, which gave me pause. And while the topic was focused on things like having to pick up poop and the amount of pet hair that needs to be cleaned up—first world problems, gah!—the one thing I can say that I wrestled with was getting home at various times through any given workday to tend to potty break and medication duties when Gretchen was in her final months of life. The same was true for my 19 year-old cat, Silver, who needed lots of extra tending during his end-of-life which was only months ago. Yes, those times were stressful, but only because as anyone who has done it themselves knows, there are always days when things don't go so swell during that time of life. And sometimes, your pet just wants you. Not another familiar person or a pet sitter who could just as willingly and aptly take the helm, it's you they really need—and that can feel overwhelming. That makes picking up poop and vacuuming more often pale in comparison and in my mind, a joyful chore.

Yes, the rest of the time that I spent with both pets was cake and I never took it for granted. But I digress.


The case for going low-tech

Since none of the lives I'm responsible for can't speak, it's important that I get to know them pretty well, and I need to do so right out of the gate. Behavior, habits, play and exercise preferences, eating rituals, where they like to hang out in the house, how they engage with other pets in the household, that sort of thing. That can give me a solid picture of what's going on and if there things I need to monitor a little more closely. 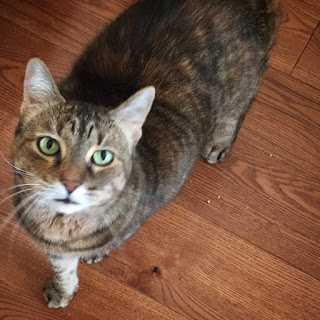 Something else that I make note of on a daily basis is what's happening outside, in the litter box or for exotics, in their enclosure. A pet's waste speaks volumes. I call it 'reading tea leaves'. When meeting a family for the first time, I ask, 'How often is your pet having a bowel movement?', which is sometimes met with a look of panic and a response of, 'That's a good question...'

In fact, a traditional rectangular litter pan isn't even necessary; an old plastic storage box, so long as it's easy to step into and deep or big enough (the latter is something that I find isn't so for most obese cats or those with mobility or pain issues, like arthritis) is fine to use.

A human's preferences and biases often become a focus when choosing a litter pan, which can translate into a lot of valuable information about the pet's behavior or health being missed or misinterpreted—which is never a good thing.

Designed so that daily manual scooping isn't needed, these products seem to be a boon for those who despise the task of taking one minute a day to pick up whatever tool-of-choice and scoop out urine clumps and stools from the box.

'Oh, the litter box smells so bad!' (If you scoop it once or twice a day and dispose of the waste, it doesn't.)

'I forget to do it. Then my cat won't use the box.' (Make it a routine to scoop at the same time each day so it becomes a habit.)

Animals don't share the same language, and because of that we need to work a little bit to decipher how things are doing with them. I think that technology and advances are great, but I assure you that nothing takes the place of a human paying close attention to any changes that might be happening. And for that reason alone, I say get over the drudgery that is all of under two minutes daily and tend to that litter box.

(I should add that I realize that some people might find it difficult to scoop regularly because of physical limitations or illnesses, so for them a self-cleaning box is an understandably attractive solution.)


Why keeping tabs is important

When I'm caring for a pet, I'm looking for a few things in the litter box:

-How much is there?

-How often I'm finding it

Along with that, I'm keeping mental track of how much water the pet has consumed in a 24-hour period and how long of a timeframe has passed between their last meal and a bowel movement.

Visiting the litter box more often to urinate could mean that a urinary tract infection is present, as well as other health issues that need treatment. Ongoing loose stools could indicate other health conditions. Stools that are chronically too firm in an older cat could signal a change in kidney function. And if there isn't a stool left (ideally) once a day, that can indicate a blockage, constipation or GI motility that is inefficient (the latter two are more common in cats with diminished renal function) and those need prompt treatment as well. Vomiting just outside the litter box after going potty means something too (click here).


The payoff of going old-school

Relaying that kind of vital information to your vet can make the process of ruling out some things and getting the right diagnosis much faster and less challenging—and making it easier to resolve or address an issue. Getting to the vet sooner than later also has the benefit of saving you money.

If you're using a self-cleaning litter box, it's just too easy to miss the clues that visually inspecting and scooping a traditional box on a daily basis can yield. Do yourself and your favorite felines a favor: keep it simple and use a regular litter box and while you're at it, consider using two boxes for one cat, and at least one box per pet in multiple cat households.