When chatting with a pet owner for the first time, they often describe their cats as finicky eaters, sometimes turning their nose up at food they are offered or just picking away. This leaves their humans alarmed at times, but most often frustrated with the amount of food that can get wasted.

I always recommend that if their furry friend hasn’t seen their vet recently, to do so to rule out any underlying health issues that can be a contributor, especially if it's a departure from their usual behavior. The good news is that most often, the fussiness over food isn't a sign of a health issue per se; ennui grasps cats easily, especially when it comes to chow time.

If all is clear on the health front, I encourage a few suggestions that might include tricks that typically pique a cat’s interest (primarily renal kitties): offering canned food that’s been warmed up, trying a different texture (pet food companies offer varieties of wet food in pâté, shreds, chunks and even in a smooth puree and with dry, companies are producing kibble in several pleasing shapes), or even feeding the pet in a new place. 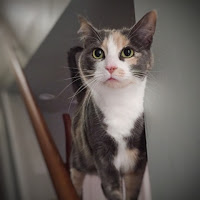 What might be seen as the ultimate in pickiness makes sense once deciphered: some serving dishes are displeasing to cats. With their long, sensitive whiskers, it can be uncomfortable to dine from a dish that is too deep and narrow. Wide, shallow dishes, preferably crafted from ceramic or glass—plastic can harbor bacteria—provide the perfect balance of comfort and functionality.

Indoor life for pet cats is something that veterinary professionals routinely espouse, and for good reason: there's protection from being injured by other animals or hit by vehicles, not to mention the lessened risk of being exposed to disease. But living solely indoors is by its very nature, incompatible with a cat's inherent nature: they're hunters. But that doesn't mean your cat should be let loose to roam.

Foraging or puzzle toys, a topic that I've discussed before, are the preferable choice to provide the mental stimulation that felines crave when it comes to getting their food, no matter if one decides to go the homemade route, or buying a commercially produced version. In keeping with that idea, one product that's fairly new-to-the-market grabbed my attention. From the looks of it's design, any frustration that your favorite feline may experience during mealtime would be easily quelled.

The NoBowl Feeding System pushes all of the right buttons; it indulges a cat's inherent need to hunt for their food—a part of the species' constitution that behaviorists have long understood—while boosting activity levels. Mitigating behavior and health issues related to bowl feeding is a benefit as well. Dr. Liz Bales, VMD is just one of the minds behind the successful product, which began as a project launch on Kickstarter in early 2016.

She and I chatted by phone earlier this week, and she emphasized the need to understand the feeding behavior of cats.

"Cats are solitary hunters; they want to hunt and eat alone," Bales adds that the way that that we feed our feline friends—plopping a bowl of food in front of them, and in multiple-cat households, all together, is counter to their nature. And because they're crepuscular (most active at dawn and dusk), and unlike us humans—who are diurnal—that adds to the problems that cats face in life alongside us.

"Cats hunt 9 to 20 times in a day [a 24-hour period], and 60-80% of their waking time is spent hunting. They're eating small, frequent meals during those twilight hours, and they'll kill multiple small prey," Bales noted.

Those small meals amount to about a tablespoon or two each time (a cat's stomach can accommodate that much food), which is far less than cats are traditionally served at one serving in a bowl. And, as Bales points out on the NoBowl website, cats engage in a series of behaviors—referred to as the seeking circuit—that include hunt, catch, play, eat, groom, sleep.

"Mealtime isn't just about eating; they need to interact with their food. The way that we feed cats today doesn't serve them well. We're overfeeding their bodies, and starving their minds."

(Dr. Temple Grandin touched on the concept of 'seeking' in her book, Animals Make Us Human, and something that neuroscientist Jaak Panksepp wrote extensively about in Affective Neuroscience: The Foundations of Human and Animal Emotions.)

The design sets the NoBowl apart. Though it's designed to hold a ration of food like other feeders, that's where the similarities fade. The product's tactile design includes a shape and size that mimics that of a bird or mouse, and as importantly, it has a soft skin that allows cats to use their teeth and claws to pick it up and roll it around like they would prey.

Bales points out that the frustration that cats feel from being bowl fed and not engaging in the seeking circuit isn't limited to diminished emotional well-being. It manifests physically as well. Besides the weight gain (a result of the limited activity), issues in the urinary tract, including Pandora syndrome and cystitis, are suspected to be connected.

According to Bales, over 13,000 cats are now using the NoBowl Feeding System, and that's a lot of pets who will likely be avoiding complications in health and behavior.

While attending a veterinary conference, she recalled that at least one of the speakers, after ticking off a list several diseases like cancer, stated, 'What is the number one cause of death in cats?' Their follow-up answer? Euthanasia.

That resonated with Bales, and it ultimately changed the trajectory of her life's work. And so the NoBowl was born.

The unfortunate truth is that each year, countless numbers of cats are regularly relinquished to shelters because of behavioral issues, inappropriate elimination and other problems that families are at a loss to address. In many cases, the cats don't even get that far. Families may decide to euthanize because they feel they've no choice.

"We are raising the standard of care for our cats, and by giving them what they need, we can in a lot of cases reduce the need for medical treatment—and costs."

And by all accounts, far more than that.

Click here for more details, and watch a video of a cat using the NoBowl Feeding System below.