I'm no stranger to barking dogs. In fact, I revel in being able to understand the joy that they may be expressing to me when we're spending time together – or whatever message they are conveying. Communication is important between my charges and I. I think most people, dog lovers or not, will agree that gratuitous barking is frowned upon. When barking extends beyond being what one would deem to be warranted, it just causes strife.

It seems important to point out that a dog's barking is never chargeless – there's always a point to it, though it may not seem like it. As I said before, it's a form of communication.

I think it's safe to assert that most of us have been in a position of living within earshot of a dog that barks constantly. I know I have more than once.

What I'm writing, I get to work from home, which is great. But not so much when there is a neighbor dog just a few steps away who frantically voices her displeasure of regularly being left alone for too many hours on end, or when she hears a noise, or...

You get the picture. 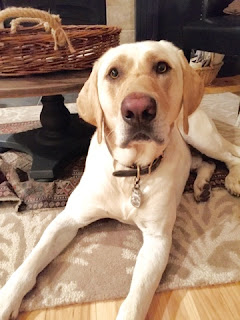 This is a scenario that I'm often presented with by readers who ask my advice on what to do (though sadly in some cases some of the dogs are left outside 24/7) to get some resolution. It's a difficult situation to approach a neighbor with no doubt. My philosophy is that you'll gain the most ground by being non-confrontational, and conducting yourself with tact and kindness.

Case in point: a few weeks ago, I decided to put my irritation, along with my apprehension about talking to my neighbors aside and look for an opportunity.

In understanding our reluctance to say anything to a neighbor, that can guide us in our approach and how we steer the conversation. After all, causing tension or making someone feel attacked won't further our cause. Nor will not giving the other person and opportunity to speak, or to come up with solutions to the problem.

I took the chance to reach out to my neighbor during an exchange of small talk, which felt totally right. After her asking about Gretchen, who had just passed, I interjected along with my response...

"Oh, Minnie looked adorable in her little coat the other day... speaking of dogs, I'm kind of concerned about her. I've noticed that she seems very uncomfortable when she's left alone – which seems to be happening a lot lately – barking and carrying on with increasing intensity as the day or night wears on. I know that in order for her to go on like that, she must be really upset, and that's a concern. I have to say it's really hard to know that's going on, and more importantly, to listen to especially when I'm trying to work from home. I tried moving into another part of the house to try to buffer myself from the noise, but to no avail. I know you can understand my frustration..."

This not only conveyed, yes, first my concern for the dog's mental and physical well-being, but also established how the behavior affects me. If one issue didn't garner an equally mindful and engaged response, surely the other would. And I was right.

An apology from my neighbor was enthusiastically extended, along with her thoughts on other things that could be contributing to the barking, like squirrels roaming around outside and the birds attracted by the outdoor feeder by the picture window. After her own brainstorming how the latter triggers could be mitigated, it didn't take her long to muse about workable solutions for the bigger issue at hand: the dog's boredom and unhappiness about being left alone so long.

Together, we also talked about additional strategies to help make the dog happier.

Though it took a little time for the family to get on the same page and work together to make sure the pet was as well-adjusted as possible while everyone was away, things are much better now.

Granted, the situation had a good outcome in large part because the dog's owner was receptive – though I did my best to posit her to be – not all people feel as empowered as they'd like being presented with a conversation like that. I'm not sure that the level of civility that I projected is something that many people even expect these days. And let's be honest, not all are interested in addressing a problem like that when it's brought to their attention.

In my experience, whether it's a neighbor's barking dog or any other situation where you need to approach another pet owner about their dogs behavior, positive reinforcement is a concept that works not just for canines, but people.

Click here for more on using positive reinforcement to dialogue with pet owners who are behaving badly, whether they know they are or not.