Those who know me are aware of my enthusiasm for travel, and it's something I take the opportunity to do whenever I can. In fact as I write this, I'm aboard a flight to warmer climes.

No matter if I'm visiting a locale near or far, traveling is a great way to engage with others. Invariably, I'll find myself in conversation with other visitors about our respected travels, where "home" is, etc. I most often travel solo, which piques people's curiosity when they realize that I don't have friends or family that I'm waiting on or need to consult before heading to the next activity. It's never too long before someone asks about what I do for a living (something that is more common amongst Americans than those in other cultures) – something I try avoid letting out of the bag completely, as the topic then gets stuck solely on pets, animal behavior or "I've noticed my dog is doing this or that, how do I get them to stop?".

I often only disclose that I'm a freelance writer, which is more neutral and easy to navigate conversationally. 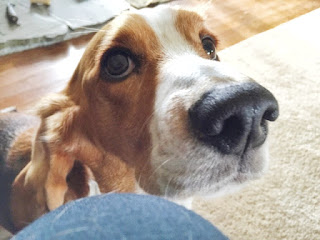 Though I love what I do, shutting off the work that I do directly with animals for a few days is often a goal. Quite honestly, it can be frustrating to be bombarded with a stranger's tales of noncompliance with their veterinarian's care recommendations or their qualified (and sometimes not qualified) dog trainer or how they are involved with what is clearly a poorly-run dog rescue.

Regardless of any of that, I have to say that I must be a magnet for people that love talking about their pets – it always happens. It's not a surprising thing, really, considering how much a part our companion animals are of our lives.

That said, I admit there's one aspect of that togetherness that I find especially irksome: Emotional support animals.

It's not the fact they are happily accepted in the broadest sense and beneficial to folks that have a legitimate need for them. It's the blatant skirting of the system and nose-thumbing that people engage in so that they can keep their pet with them, no matter where they go. I'm floored by the devil-may-care attitude of many of the pet owners I meet who have no problem telling me - despite my not asking - that though they really don't need to have their furry companion with them, they do it because they can.

"I have a little anxiety. But my psychiatrist just wrote me a note to allow me to have my dog with me, it was as simple as that," one woman casually told me on a recent trip to Venice, FL a few weeks ago.

Smirking all the while, she added,"...and there's nothing anyone can do keep me from having him with me as I travel."

On each trip, I'll have at least one person say something like this to me. A psychiatrist can draft a letter detailing the need, end of story. I'm befuddled, and yes, surprised each time, though I reply neutrally and do my best to change the topic. One doesn't even need their own doctor's help to do so: websites providing licensed psychiatrists to write these letters so long as one has the money to fork over are gaining popularity.

The biggest problem that I see with this trend is the animal's welfare: Is the pet capable of handling themselves in social settings period, not to mention those clogged with bustling airline passengers and the like? Do they have behavioral issues, like fearfulness? Putting a dog in a situation like that could be detrimental to their emotional and physical well-being.

Further, are they healthy? Have they received the proper vaccinations? Are they reasonably clean?

As importantly, those that have a legitimate reason to have a support animal – and yes, they're out there – feel slighted because of any backlash caused by people scamming the system.

As well they should.

A recent piece in the New York post highlights the problem and really, how easy it is to pass oneself off as needing an emotional support animal.

Anthony Berklich, of the travel site Inspired Citizen had a telling statement about travelers and their fakery.
“Consumers who are being nickeled and dimed for every little thing don’t feel badly about getting through the system.”
I agree with Berklich's comments in the piece in that's a positive thing that emotional support animals are allowed on flights. However the privilege of that is accompanied by mindfulness and responsibility, something that in my experience isn't always packed along with the other essentials that one with a support pet decides that they need on their travels. Skirting the system extends beyond emotional support animals, unfortunately, though it's probably the easiest loophole since their premise reflects a need that can seem invisible to people.
Though it can be comforting to a human to have their pet close, it's vital that the largest piece of the equation is there: Can the pet handle what their humans are asking of them, and is it fair?

Lorrie Shaw is an avid traveler, freelance writer and owner of Professional Pet Sitting. Shoot her an email, contact her at 734-904-7279 or follow her adventures on Twitter.