The minute I open the door, the tell-tale smell is unmistakable. Then I look at the face, and usually there's a note on the counter confirming the unfortunate news: one of my canine charges had gotten tangled up with a skunk in previous days.

It happens in all sorts of scenarios, and some of the dogs in my life seem to be more prone than others to getting sprayed by a skunk.

Though skunks are active year-round, this time of year seems to be the most prevalent time for the unfortunate interactions. That because we're in the midst of mating season for skunks, which will run through March.

For that, they get a bad rap but it seems important to note that they serve an important purpose as they're helpful in controlling mice and insects populations.

The current mating season means babies aren't going to be far behind; they'll be along in May and June. Mother skunks are fiercely protective of their kits, hence an additional opportunity for skunking encounters.

These creatures face few dangers (the Great Horned Owl is pretty much their only predator), in light of their general docility. They do have poor vision, so more often than not if they do meet an early demise it's because they've ended up in a path of a moving vehicle. Rabies is a danger with the species, too; they're the highest carriers of the fatal disease. Given those factors, there are plenty of them around and understanding their habits can help avoid the need to perform the time-consuming task of removing the stinky musk from the affected family members, human and pet alike.

Skunks are crepuscular, so with that in mind, being more cautious as your pets are poking around during peak periods – around dawn and dusk – is crucial. 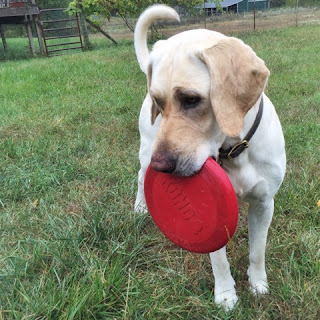 Though they inhabit more open areas like clearings and areas that border forests, skunks will seek cover where they can and as necessary. This usually means low in bushes and brushy areas, and unexpected niches like under porch steps – wherever they can hide should they feel threatened. I call them "hot zones". Dissuading dogs, as hard as that can be, from sniffing around those areas is a plus.

I often extol the virtues of not being distracted while out and about with dogs, and avoiding a possible skunking situation seems like as good a reason as any to have your full attention on what's around you. If you happen upon a skunk, know that they will give warning if they have the chance: they stomp their feet and raise their tails in a physical display. Keeping a pocket of high-value treats handy can help to calmly lure your dog's attention in your direction so that you can make a calm exit from the scene should you be given the chance.

Speaking of warnings, consider making a little noise – tap on the window or door as you head out into the yard and then clap your hands before letting your ever-curious pets outside around first light or as your household is enjoying some outside time near or after dark. While venturing through your canine adventures at peak times, your voice can be an asset. I recommend talking to your dogs as you walk; I find that's sufficient in giving a skunk some warning. If one of the wild critters hears you before you get too close, it can buy them some time to find a suitable hiding spot until you're at a safe distance.

Though generally I don't use retractable leashes, I find using them in situations where a dog would normally be unleashed, say in a fenced yard or trained on an electric fence, to be a boon. It gives the pooch autonomy to sniff around to get business done while offering enhanced control on my end to mindfully keep them away from potential hiding spots during peak periods. Using a long lead is an equally good option.

It wouldn't seem right to offer the tips that I've used over the years without noting the simple recipe that helps to cleanse and effectively and safely neutralize the organic compounds, called thiols, in skunk spray. Skip the tomato juice. Instead, have a fresh, active bottle of 3% hydrogen peroxide on hand, as well as a couple of other common household products, including a clean plastic bucket and liquid soap. Click here for the recipe, created by chemist Paul Krebaum.