With spring officially here, there's plenty to look forward to. There's the weather, longer days, more outdoor activities – and with windows flung open wide (or is that just my house?), there are more sweet sounds of wild birds greeting the day. 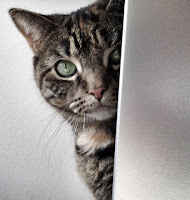 The latter is a joy, no doubt, but we humans aren't the only ones who find our feathered friends interesting. Our cats do, too, which is fine if they are kept indoors.

Outdoors, they often stalk wild birds and yes, capture them and worse. In fact, in many articles that I've written about cats, there have been comments aplenty from folks in the Ann Arbor area asserting their displeasure at the numbers of outdoor cats roaming their neighborhoods and killing vast numbers of wild birds. Their feelings about outdoor cats are understandable, and the banter between commenters can get quite heated.

The problem of outdoor cats offing vast numbers of wild birds is just the tip of the proverbial iceberg, a reflection of a bigger problem. It's one that has plagued communities not just in our midst, but around the world.

A study released in late 2013 notes that free-roaming cats are responsible for the majority of wild bird deaths, with a bulk of those stemming from ferals and strays.

Getting the numbers of cats that comprise feral colonies down would make a significant impact of course, and understanding and dealing with the complex roots of keeping strays from finding themselves in the situation they're in would, too. The fact is that the human factor has the biggest impact on these two groups, for both better or worse. Our cavalier attitude to what keeps feral and stray populations thriving — reproductive success, the strongest biological factor in any species — springs eternal. A collective willingness to let go of the idea that 'it's not my problem' and wholeheartedly striving toward a goal of getting a few hearty strides ahead of feline biology, which, by the way, has demonstrated the ability to adjust and turn on a dime to compensate, is needed.

That said, pet cats are responsible for their fair share of the billion-plus wild bird deaths that are reported to be killed annually, according to the study. These kind of numbers leave bird lovers aghast, and serve as an eye-opener to those typically not as aware of the winged creatures flitting around outside their doors.

A screening of The Messenger on April 27th here in Ann Arbor will surely appeal to both. The documentary, touted for its splendid avian cinematography, examines the dangers that songbirds face around the world — including cats. The movie, promoted by Michigan Audubon and Washtenaw Audubon, will be presented at the Michigan Theatre.

After the film, Dr. Cathy Theisen, DVM will be on hand for a brief Q&A to talk about transitioning felines accustomed to living outdoors to life as indoor cats.

For many people — given a felines tendencies — it seems like a natural thing to allow their cats to roam freely, even if it's just for a short time each day. It feels like a harmless prospect, right? The truth is, it takes no time for any cat to capture a bird and wound or kill them.

(Just the same, a cat can be the unwitting victim of various scenarios: poisoning, accidental or otherwise; becoming the prey of a coyote; being accidentally trapped in a shed and starving to death; getting hit by a vehicle; succumbing to injuries from a tangle with a wild creature or even dog.)

Providing an enriching, stimulating environment is one consideration when helping outdoor cats make that leap to being indoor lifers. That's just one aspect that Theisen will cover in helping to make it successful.

To be fair, feline predation isn't the only threat to wild bird populations. Other factors, including collisions, wind turbines, habitat destruction and climate change are contributors and experts in those areas will also be on hand for a short Q&A after the show.

For more on the event, including reserved ticketing information and a pre-movie meet up with birders from around the state at HopCat, click here.

See a preview of The Messenger below.