Wherever I am walking with one of my canine charges, there are usually a few smiles. It's hard for most people to walk past a dog without grinning and making a favorable comment, right? It goes without saying that for some, it's hard to suppress the urge to want to pet the dog I'm chaperoning or to stop and make small talk — and who can blame them? Dogs are fun! 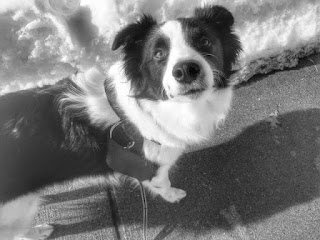 I'll admit that I don't allow people — especially those who are unfamiliar and ditto for children — to approach or pet my charges, and that's for several reasons. Some of the dogs are not comfortable with that. Others may be recovering from surgery or are old (and may be experiencing things like cognitive dysfunction). A handful are well, a handful when interacting with others. But let's not forget that some folks, regardless of age, aren't very good at knowing how to get up close and personal to a dog with care and finesse.

And any of that could be a recipe for trouble, (and that's not even including approaches from other dogs.)

Aside from that, it can be a challenge to keep some dogs on task, especially when the goal is to get them out for a walk to get their business done.

I often need to speak up and advocate for my charges — and at times, myself for that matter as yes, sometimes I'm just not in the mood to stop and talk  — and forgo any interaction with a well-meaning human. I'm all too aware that doing so, I might seem unfriendly or it might be off-putting to the other person, and that's not something I want. It's just not my way. Depending on the situation, I might be honest and say something like, 'Oh, Bo isn't comfortable interacting with people, so if you don't mind...' or 'Sadie's eyesight isn't that sharp anymore so that makes her wary of being approached, so if you'll excuse us...', and admittedly my preference is to be honest because it does promote a level of awareness.

I do find that one no-fail response is easy to give, is as simple as dipping into my well of neutrality and keeps my charge and I on track:

'You'll have to pardon us... we're in the middle of a training exercise. Thanks for understanding!'

I don't think there is a person alive that would assert themselves any further upon hearing that.

The next time you're out with your dog and want to avoid an interaction, you might consider cheerfully exclaiming the same thing. It's kept many a busy day moving along smoothly for me and for many of my charges, happy and in their comfort zone.

Lorrie Shaw is a freelance writer and owner of Professional Pet Sitting. Contact her at 734-904-7279 or follow her adventures on Twitter.
Posted by Lorrie at 7:25 AM